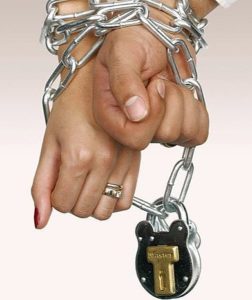 As young people you must know that it is your right to say “NO” to your parents, family members, friends, or religious groups when they pressure you into a forced marriage. Young people must reject the notion that it is acceptable for them to be ‘imprisoned’ into a forced marriage. In our opinion, those trusted groups are betraying you. They are forcing you into a forced marriage and for that crime, the prison term for parents, family members, friends, or religious groups in Canada is 5 years. REMEMBER THAT and welcome to the Federal law S-7 that protects your rights.

In 2015, Canada’s Federal Law S-7 came into being. Among its many provisions, it enshrined forced marriage as a crime in the Criminal Code. It clearly states “Everyone who celebrates, aids or participates in a marriage rite or ceremony knowing that one of the persons being married is marrying against their will is guilty of a crime punishable by up to five years in prison.”*

One goal of Bill S-7 was very straightforward: Discourage and deter parents, family members, religious groups and anyone from violating your human rights as young people. Forced marriage is recognized by the United Nations as a violation of human rights. In Canada, it is a crime to force anyone, whether a child or an adult, to marry. It is also a crime to take anyone under the age of 18 out of Canada to force him or her to marry in another country.

PACT-Markham’s Task Force to End Forced Marriages’ primary goal is to support you in protecting your rights. We are presently lobbying for the establishment of a 9-1-1 Rescue Protocol for young people who seek refuge from a forced marriage imposed by their parents, family members, friends and/or religious groups.

We are in talks with Victim Services of York Region to ensure that you will be looked after once you are seeking refuge. Victim Services of York Region is a non-profit, charitable, community-based organization working in partnership with York Regional Police, the Ontario Provincial Police, Aurora detachment, and York Region Fire Services. In this way, they meet the short-term needs of victims of crime and tragic circumstance by providing emotional support, practical assistance, and referrals to community resources for continued support. Service delivery is based on the principles of empowerment and prevention through education and advocacy.