FACTS as to Why the City of

is One of the Biggest Sex Traffickers in Ontario

In Markham, we have a Mayor who refuses to cancel the licenses of 50+ illegal body rubs that are in the business of selling sexual services to ‘johns’ in a Markham network of spas, parlours, condos and homes.

Not surprisingly, the same Mayor also refused to suspend their licenses in order to protect sex workers from being forced to work during the COVID-19 pandemic until the Premier of Ontario imposed a state of emergency, thereby forcing the Mayor’s hand.

Let’s understand the 3 crimes that are taking place in Markham’s body rub parlours/spas!

Fact is the owners and operators are breaking the law and they, as pimps, know it as well.

Proof of Criminality and Penalties!

Crime #1: Federal Law C-36 (section 286.1) states: “It is illegal to earn money by owning, managing or working for a commercial enterprise, such as a strip club, massage parlour or escort agency, knowing that sexual services are purchased there.”

Charges Laid for #1. PIMPs a.k.a. owners/operators of body rub parlours will be charged with the Procuring Offence: (section 286.3) “Procuring a person to offer or provide sexual services for consideration.”

Penalty for #1: Indictable offence, with a maximum penalty of 14 years imprisonment.

Crime #2: Purchasing Offence: (section 286.1) “Obtaining sexual services for consideration, or communicating in any place for that purpose.”

Penalty for #2: Dual procedure offence with maximum penalties of 5 years imprisonment if prosecuted on indictment and 18 months if prosecuted by summary conviction. Escalating mandatory minimum fines starting at $500.

Crime #3: Criminal Code (R.S.C., 1985, c. C-46): Aiding and Abetting in the commission of a crime. “In Canada, a person may be charged with the crime of aiding and abetting, even though he/she was not present during, or did not physically assist with, the commission of the crime. The ‘person’ who aids and abets a crime, may provide support by giving advice, financial support, or by taking action not directly related to the crime itself, for the purpose of facilitating its success.”

As such, Markham’s on-going act of licensing the body rub owners’ and operators’ illegal activities benefitted the City in the amount of $1.2 Million in licensing fees over 5 years.

Let’s help Markham Council STOP itself from ACTING as a PIMP to the PIMPS and SEX WORKERS and let’s put an end to the Exploitation and Trafficking of Women in Markham! 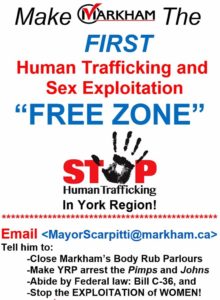 Email the Mayor at <MayorScarpitti@markham.ca>.

Send him this message by copying and pasting this:

“Frank Scarpitti: STOP ACTING like a PIMP to the PIMPS and SEX WORKERS and GET OUT of the BODY RUB/MASSAGE PARLOURS/WELLNESS CENTERS NOW!”